When I heard Patrick Rothfuss was doing a book signing near me, I had to go and have him sign a copy of the 10th anniversary edition of The Name of the Wind.

I have a small secret: I haven’t actually read The Name of the Wind yet. The shame, I know! I definitely went through a phase when I first discovered that book signings are a thing where I went to all of them that were promoting books I was interested in, even if I hadn’t read them, but I’ve since reigned it in and stopped doing that.

I made an exception for Patrick Rothfuss, though, because he’s Patrick Rothfuss! As a huge fantasy fan, I’ve of course heard of the Kingkiller Chronicles and I have no doubts I’m going to love them, but I’ve been refusing to read them until the third book is announced. After last night’s signing, I’m kind of reconsidering that stance, but more on that later.

I was actually afraid they were going to run out of wristbands since they only had a limited number and were prepared to have an overflow line outside for people who couldn’t get into the actual event, but they still had some left by the time I got there. I was also lucky enough to get a seat near the front, which meant a shorter wait for the book signing, but there was a big pillar between me and the stage…it worked out perfectly, though, because Rothfuss stood at the podium and spoke instead of sitting at the table next to the podium, so I was able to see him just fine.

I’ve never been to an author event before where there wasn’t a moderator, but I suppose Rothfuss is a pro at this by now and had no issues running the show himself. He opened it up to Q&A right away, and I was pleasantly surprised by how good the questions were! I’ve mentioned before in some of my recaps that audience questions can be super cringey, but I thought the group at this signing had a great set of questions and made the event a lot of fun. 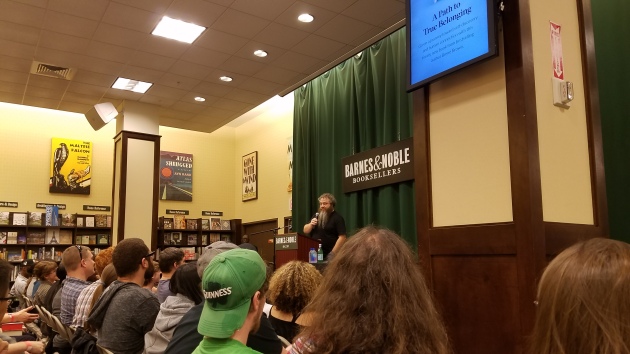 Of course, people wanted to know right away about Rothfuss’ movie and TV deal with Lionsgate. Rothfuss said he’s really excited to have Lin-Manuel Miranda (the writer and star of Hamilton) as a producer and said Miranda has essentially appointed himself the chair of the Don’t Fuck It Up Committee, in addition to working on the music for the productions. So he thinks the end result is going to be great.

Someone changed it up and asked for Rothfuss’ thoughts on sneaking two cats into her dorm room and hiding them from her super. It’s such a random question, but Rothfuss loved it and said he really enjoys answering things he hasn’t been asked before. His response was that college is about learning experiences and the questioner will definitely learn a lot from the experience, though he recommended she find out the consequences for being caught before deciding on that route. But he also quoted an Onion article that said, “Do you like boxes of shit in your house? Get a cat.”

Another question that Rothfuss spent a lot of time on was whether or not people are supposed to like Denna. Not having read the books, the question didn’t mean much to me, but Rothfuss asked for a show of hands on whether people liked her or not, and it seems like she’s pretty divisive. Rothfuss said he actually wrote her to be really likable, but that he was never able to make everyone like her. He eventually concluded that it’s probably impossible to make everyone like Denna because society expects women to be intellectually, emotionally, and sexually available, and Denna’s not. So he suggested that those who don’t like Denna think on that and then take another look at her character.

I was expecting to be disappointed by the reading, but it was hilarious. He had a lot of great jokes in there; my favorite was when he said that, despite early criticism that his book was derivative, he wound up publishing a book about a boy who went to a magical school. This is especially funny since The Name of the Wind came out the same year as Harry Potter and the Deathly Hallows.

He had a few more minutes for rapid-fire Q&A at the end, so he took a handful of questions. In response to a query about his beard maintenance, he said that his beard is the product of a dislike for grooming and that he certainly doesn’t do anything to maintain it. When a kid asked what Rothfuss’ pet dragon would look like, he responded that he’d want an herbivorous dragon for ease of care and feeding. I wasn’t familiar with the specific dragon he was mentioning, but apparently it can’t be ridden, which he thought was unfortunate but worth the tradeoff. And when someone asked what he likes to draw, Rothfuss said he’s a terrible drawer, but he does like sketching out maps, which his friend has turned into the beautiful maps in his books.

I had so much fun at this signing. If you ever get a chance to see Rothfuss in person, I definitely recommend it. He’s a great storyteller and is incredibly entertaining, and I enjoyed him a lot. I’m very, very excited to read his books.

Part of the fun for me, too, was meeting people in person who also love books! A special shoutout to the lovely Alexandra and Crystal, who I enjoyed meeting at the book signing. Thank you for not judging me too much for not having read the Kingkiller Chronicles just yet and for making the event go by so fast! The three of us spent a good hour talking before the event started and then another hour while we waited in the signing line, but it really felt like no time at all!

Since I haven’t read his books, I was super lame and didn’t say anything to Rothfuss when he signed my book. I just thanked him and kept the line moving. But he talked to a few of the people in line around me and seemed really nice. I’d like to meet him again after I’ve read his books.

Speaking of, what’s the verdict on whether or not I should read his books now or wait for the third book to be announced? There was a four-year gap between books one and two, but it’s been six years since book two came out, so I’m reluctant to read them and then have to wait for the last book when I’m already so close. But Crystal and Alexandra insisted that I wouldn’t regret reading them now and then just rereading them in anticipation of the third book. I’m not going to read them just yet since I have a bunch of other books on my shelves that I’ve been meaning to get to for ages, but I can’t decide if I should save The Name of the Wind or just read it when I finally feel like it. Let me know what you vote for in the comments!

So yeah, I had a blast at the signing and I’m so glad I went. Now I just need book three to be announced…maybe I can catch him on the book tour for that!