How is it (almost) December already?! I just don’t understand. I’m so excited, though, because I love the holiday season! New Yorkers really go all out in their decorating, so you really get the holiday atmosphere here, plus I love going back to North Dakota for Christmas, where my mom also crazy decorates for Christmas. It’s so fun! And it’s my birthday this month, so what’s not to love about December? But you’re here to talk books, so let’s get to it!

I’m actually focusing this month on books that have been on my shelves since the beginning of 2017. There are two books, Wuthering Heights by Charlotte Bronte and Buddenbrooks by Thomas Mann, that I have made a conscious decision not to read anymore this year. Instead, I’m planning to read them in early 2018. But the remaining three have been hanging out long enough, so I’m way overdue to read them.

Other than those three books, I want to read a book that I’ve had since January 2017 so I can clear that off of my shelves. Otherwise my sole focus in December is to read off my shelves. My goal is to try and get my physical TBR down to 30 books so I can start buying more books and borrow from the library in January. I’m not putting them on my TBR, but you can see a few of the books I’m most excited to read in my End of the Year Book Tag post.

The Earl Takes All by Lorraine Heath

I really don’t know anything about The Earl Takes All, but I tend to enjoy Lorraine Heath’s novels, so I’m not too worried. According to the blurb, Edward Alcott promises his dying twin, whose wife is pregnant, to pose as his brother until his sister-in-law gives birth so that the news of her husband’s death doesn’t cause her to miscarry the baby. I can’t say it’s the most intriguing premise, but we’ll see how it goes.

Why Earls Fall in Love by Manda Collins

I think you’re going to notice a theme here…I don’t know anything about this book either. Apparently Why Earls Fall in Love tells the story of Georgina Mowbray as she falls in love with the nephew of her employer, who finds himself intrigued by Georgina even though she’s different from the type of woman he usually woos.

Anything For You by Kristan Higgins

Did you guess that I didn’t know anything about this book? Because if you did, you’d be right! I picked up a copy of Anything for You at a joint book signing with Sarah MacLean almost two years ago, but I still haven’t read it. Apparently it involves an on-again, off-again relationship between the hero and heroine, which I can’t say is super appealing, but I’ve heard that Higgins writes really sweet contemporaries, so I’m expecting to enjoy this a fair amount. 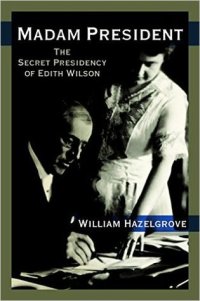 Madam President was a gift from my mother-in-law and, interestingly enough, will be my second biography of a president’s wife, which is really funny since I’ve technically only read one presidential biography at this point (or I will once I finish FDR). This book is about Woodrow Wilson’s second wife, whom he married while in office and who essentially took over her husband’s duties as president after he suffered a severe stroke. I think it will be a really interesting read.

Ok, so those are the four books that I really need to read this month, though I anticipate getting lots of other reading done before the end of the month. I’ve actually got a bunch of books on my shelves that I’m excited to read, and it’ll be nice to devote my attention to them and not feel forced to stick to a readathon TBR, which I need a break from after participating in so many in November!

What books are you planning to read in December? Let me know in the comments!