It’s time for my favorite post of the year! Seriously, I really like seeing all of my books broken down by numbers and had a lot of fun putting this post together. I hope you enjoy it!

Some quick numbers for you:

So you can see I pretty consistently read 12 or more books per month, though it looks like May was a little slower. I actually would have thought June would be slower since I got married that month, but I guess I made up for some of that on the honeymoon? I also looked at the data closer, and the number of pages read seems to be pretty consistent with the number of books read, so a few long or short books aren’t significantly changing the data in this graph. 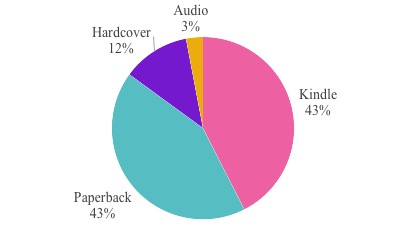 It’s interesting to realize I read a pretty consistent amount of paperback vs. kindle books! I’m not surprised I don’t read a ton of hardcover since I prefer paperback, and the audiobook figure isn’t surprising either since I don’t listen to them consistently.

I’m a little surprised to see so many books in the 200 range, but I’m not at all surprised to see the 300 range is the most popular! This is actually a great breakdown by page length, though I would argue the ones that are less than 100 pages probably shouldn’t count as books…

I clearly have a preference for backlist titles, and I don’t anticipate that changing in 2018. 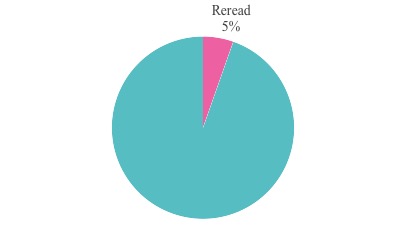 I’m hoping to increase this number a little bit in 2018, though I don’t have a hard percentage goal.

This breakdown is really interesting to me, as I didn’t realize how many books I read that I own as opposed to ones I borrow from the library or friends and family. This seems like a good ratio to me, though.

I think I read more romance in 2017 than I usually do in large part thanks to joining a romance book club, but I didn’t realize the percentage was so high! Obviously I really like romance and I don’t necessarily want to read less of it, but I do want to read more nonfiction and general fiction (in which I include literary fiction, classics, historical fiction, and mysteries).

I should also point out that the YA tab is only contemporary and historical YA, as I consider the fantasy YA books I pick up to be fantasy first and YA second. If you shift the fantasy YA books over to the YA slice of the pie, the numbers shift to 11 percent fantasy and 22 percent YA.

I also thought it was interesting to see a breakdown of what types of subgenres I was reading for certain genres. I’m not sure where Harry Potter belongs, so it got its own category in the fantasy breakdown, but you can see I have a preference for YA fantasy over adult, though I do read both. In nonfiction, I have a strong preference for biographies, essay collections, history books, and memoirs, while in romance I have an unsurprising preference for historical romance, though I am surprised by how many contemporary romances I read in 2017! 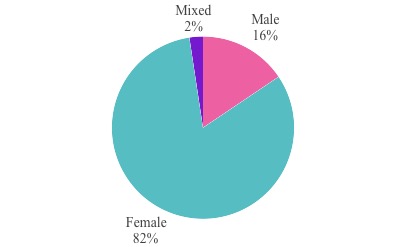 I’m not at all surprised to see I read largely books by female authors, since pretty much all of the romance books I read are by female authors, not to mention most of the fantasy books I pick up. I should probably make more of an effort to be more balanced and read more male authors, but I’m not really sure if I care enough to make that effort…feel free to make an argument as to why I should read more books by male authors in the comments!

And just to clarify, mixed is books written by both male and female authors. To the best of my knowledge, the authors I read from this year identified solely as male or female.

New to Me Authors

It’s interesting to me that most of the authors I read in 2017 were authors I hadn’t read before! I don’t think I realized how many new authors I tried out last year.

I actually didn’t read a ton of books from any single author other than Patricia Briggs, who wrote 10 of the books I read in 2017, which isn’t surprising since I became obsessed with her Mercy Thompson series. 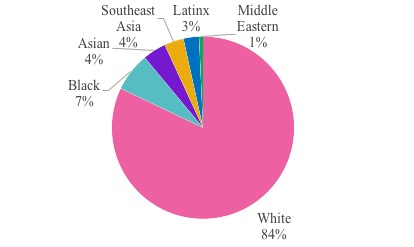 This graph sadly isn’t surprising, and it’s why one of my goals in 2018 is to have at least 30 percent of the books I read be written by authors of color. Though I’m pleased that the books written by people of color that I have read are generally pretty mixed and not solely focused on one ethnicity*. Clearly there is room for me to make lots of improvement in this set of data.

*Please note that I coded the authors’ ethnicity to the best of my knowledge based on a quick Google search and chose to label them as white if I couldn’t confirm otherwise. So the number of white authors I read could be slightly smaller, but I think the general impact of this data still stands.

Interestingly, 89 percent of the books I read in 2017 were written by Americans*. A further eight were written by Brits and four by Australians, bringing the total percentage of books written by native English speakers up to 96 percent.

For the four percent who weren’t from native English speaking countries, I read two books by German authors, two by Nigerian authors, one by a Brazilian author, and one by an Uruguayan author.

*Again, I labelled an author as American unless I had reason to search and confirm that they were born in another country (primarily if it was translated or if I’ve heard the author speak about being from another country). It’s possible a few books I read in 2017 were actually by non-American authors, but I don’t think there are enough to make a significant impact on these figures.

I only read three books translated from other languages in 2017. One from Spanish, one from Portuguese, and one from German. Definitely a number I’ll have to improve on in the future!

So only 11 books, or approximately seven percent of the books I read in 2017 were actually written by LGBTQ+ authors, at least to the best of my knowledge.

*Please note that this data is based on authors I was able to confirm were LGBTQ+ authors via a Google search. At least a few of the books featuring LGBTQ+ progatonists were definitely written by self-identified heterosexual authors, but a number of them I couldn’t confirm either way. If I wasn’t sure of the author’s identification after a quick Google search, I erred on the side of caution and didn’t tag them as LGBTQ+.

Ok, there are all of the breakdowns I could think of! I just think it’s so interesting to see the hard numbers. For instance, I want to read less contemporary romance next year since it’s not necessarily my favorite genre and expand into more nonfiction and general fiction books. I also want to make sure and read more authors of color and more translated works.

Also, special credit to my husband Dan (yes, we’re Dan and Dani…it happened, ok?) for helping with all of the graphs. I believe he has officially dubbed himself an Excel super user, and I couldn’t have done this without him.

Alright, let me know what you think of this data breakdown! Are there any numbers you thought were particularly interesting? Any analyses you think I missed or graphs you would have liked to have seen? Let me know in the comments!