I saw Piera from Piera Forde do this book tag, which was created by Books and Looks, and even though I wasn’t tagged, I decided to go for it since it’s all Piera’s fault that I’m now obsessed with the Red Rising trilogy, and I’m so excited that it’s continuing with Iron Gold!

Ten Years Later: What is a book you loved 10 years ago that you still love?

Why does Harry Potter pretty much work as an answer for every book tag?! Seriously, I can’t do a book tag without answering Harry Potter for something.

I think it was about 10 years ago that I first finished Pride and Prejudice, and I absolutely fell in love. It’s one of the few books that I continue to reread every couple of years, and even though I know the story inside and out, it never gets old.

Darrow: Who is your favorite book hero?

Wow, I’m struggling with this one. I’m not sure she’s necessarily my favorite (because I don’t think I have one), but I’ve really been enjoying Celaena Sardothien/Aelin Galathynius’ story and seeing her grow over the course of the Throne of Glass series by Sarah J. Maas. She’s not always a perfect character, but I think she really cares about her country and is willing to do anything to keep her people safe, and I really enjoy watching all of her intricate plots unfold. I can’t wait for the final book to come out this fall!

Lysander: What character that you love have you grown up with?

Anne of Green Gables! Anne and I are not at all alike, but I love reading about her scrapes and watching her relationship with Gilbert develop. She’s just such an endearing character! And I love that the series covers various times in Anne’s life, which makes it even more fun to revisit at different times of my life. Speaking of, I’m probably overdue for a reread of these books. I reread the first one not too long ago, but I need to keep going with the rest of the series. I think Anne of the Island is my favorite, but Anne’s House of Dreams is really good too. And Rilla of Ingleside is totally heartbreaking.

Lyria: Who is the scrappiest character you have ever read about?

I feel like I should have a whole slew of people to pick from for this prompt, but the only one that’s really coming to mind is Mia Corvere from the Nevernight series by Jay Kristoff. Mia has no problem fighting dirty and doing anything and everything to get what she wants, and no matter what happens, she always seems to bounce back. So yeah, she’s definitely a pretty scrappy character.

I really want to answer Gen from The Queen’s Thief series by Meghan Whalen Turner, but I’m using him for another question, so I’m going to answer Kaz Brekker from the Six of Crows duology by Leigh Bardugo, which is also an incredibly appropriate answer to this prompt. The whole duology is a heist story planned and executed by Kaz and the other members of the Dregs, and it is excellent. I love those books so, so much.

Apollonius: What character do you think is just bat shit crazy?

I mean, Sevro. Sevro is definitely bat shit crazy, which is part of what makes him such a great addition to the Red Rising series. I was trying to avoid answering Red Rising characters for this tag because otherwise the whole tag would be full of them, but Sevro is the first and only character that comes to mind when thinking of bat shit crazy characters.

Cassius: Who do you think is one of the most honorable characters?

I read about a lot of honorable characters in the various books I read, especially in fantasies and romances, so this answer could very much change depending on what I’ve been reading lately. In this case, I’ve been reading the All Souls trilogy by Deborah Harkness, and I think Matthew Claremont is an excellent answer to this question. I can’t explain why without giving spoilers for the series, but he’s developed an intense honor code over his long life that sometimes gets in the way of his relationship with Diana but is very much a part of who he is as a character.

Volga: Name the most loyal character you have ever read about or one you admire

I think loyalty is a trait that I see as frequently as honor in a lot of the books I read, so again, this could change depending on what I’ve been reading lately. Since I just finished the trilogy earlier this month, I’m going to go with Griffin from the Kingmaker Chronicles by Amanda Bouchet. He’s also a very honorable character, but I think one of his most defining characteristics is his loyalty to his family and to Cat, which is what makes him such a great hero in this series.

Moon Lords: Who do you think is the most underestimated character?

Hands down, Gen from The Queen’s Thief series. I don’t want to talk about him too much because it would spoil the first book, but it took me at least two books to start catching on to his tricks. Even four books into the series, Gen continues to surprise me. This whole series is excellent and I highly recommend checking it out if you’re looking for a classic fantasy.

Howlers: What is your favorite gang/cast/group of characters?

I answer with this group a lot when this question comes up in tags, but I have to go with the Night Court from A Court of Mist and Fury by Sarah J. Maas. They just have such a great dynamic and I love reading about them.

Alright, now it’s time for the first giveaway on my blog! I was lucky enough that Pierce Brown stopped in New York on his Iron Gold tour, so I got a second copy of Iron Gold signed to use for a giveaway! I was planning to put together a blog post recapping the signing, but decided that taking detailed notes was distracting me from enjoying myself, so I put together a short recap on my Instagram instead. 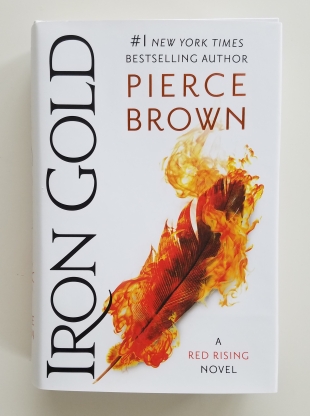 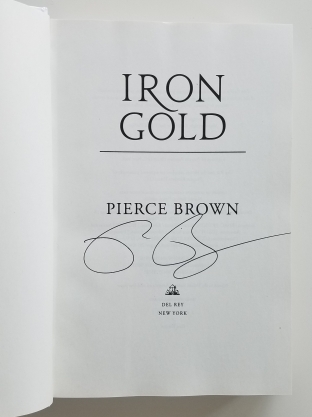 To enter the giveaway, just make sure you’re following my blog by either entering your email address or following with your WordPress account, and then leave a comment below with the character you’re most excited to see return in Iron Gold! Only one entry per person.

The giveaway will remain open until midnight Eastern on Friday, February 2. I’ll use a randomizer to pick the winning entry on Saturday, and the winner will have 48 hours to respond with their mailing address and claim the book. While I wish I could include international participants, this giveaway is for U.S. residents only.

This giveaway is now closed.