So I’m departing a little bit from my Feminist Lit February TBR with the task of reading a feminist freebie. I was originally planning to read Beloved by Toni Morrison, but I just couldn’t get into it. It was a difficult narrative style to keep up with and I didn’t like the story, so I decided to stop forcing it. Ironically enough, I replaced it with An American Marriage by Tayari Jones, which I also didn’t particularly enjoy, but more on that below. 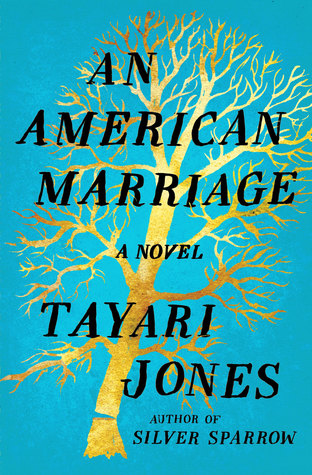 An American Marriage is a new release in February, and it got a ton of hype, including being a Book of the Month pick and the latest Oprah book club selection. The book follows a couple that’s married for a year and a half when the husband is wrongfully convicted of raping a woman and sent to prison. But when his conviction is overturned and he’s released from jail five years later, the two of them have to cope with what happened to them and how it changed them and their relationship.

I knew going in that this book wasn’t a romance novel and that it was going to be heartbreaking, but I still thought it’d be a fascinating look at the American justice system and racism in America and what marriage is today. And while it does deal with all of those topics and more, I didn’t like this book. At all.

A large part of it was the characters. Personally, I’m not a fan of unlikeable narrators because I don’t want to read about someone I don’t even like, so I was already bound to struggle with this book. But you wind up getting not one, but three points of view, and I didn’t like a single one. It left me without someone to root for, and it made it incredibly hard for me to get invested in this book. I didn’t want a happy ending for any of them, so I really didn’t care what happened at the end, and I didn’t much care about their journey to get there either.

I also didn’t think this book went adequately in-depth with the idea of someone being wrongly accused of rape. Given the timing, I suspect this book was largely written before the #MeToo and #TimesUp movement really took off, so I don’t think it’s fair to fault this book in the context of the current discourse, but I can’t help but think how many men are terrified of being wrongly accused of sexual harassment or sexual assault and what the implications are when something like that actually happens.

I was texting Jen from Firewhiskey Reader as I was wrapping up this book because she read it right before me, and she pointed out that as a lawyer, she was really frustrated by the trial because Roy was convicted based on the testimony of a single witness and there was no mention of a rape kit. I had initially just accepted this because I assumed the point was just that he was unfairly treated for being black and that the focus of the story was more on the aftermath, and while those things might be true, the more I think about it, the more I wish the trial had been covered more thoroughly. I wish the book had more clearly detailed how race played a role not just in Roy’s arrest but in his conviction, rather than just being told that the justice system failed this character.

Ultimately what it comes down to though is the characters. I just didn’t like any of them and didn’t like how they handled things and didn’t agree with their choices. I really just wanted to smack them all and tell Roy and Celestial that they really had no business getting married in the first place, and that we could have avoided this whole book if they hadn’t. I do like that the book ended on a bit of a positive note, but ultimately I just didn’t care about these characters.

I’m interested in hearing more about why people enjoy this book so much and why it was picked as an Oprah Book Club selection, because I really don’t understand the hype around this one. Yes, it deals with a lot of important topics and has room for a lot of interesting conversation, but it wasn’t a story I liked reading. Sometimes I wonder what’s wrong with me for not understanding the point of notable literary fiction, but at the end of the day I’m just not the target audience.

I will say, though, that as much as I disliked this book, I did finish it. I’m actually not entirely sure why I didn’t DNF it like I did Beloved, but I don’t regret reading it. While I’m glad that I can participate in the discussion around it, I wouldn’t particularly recommend it unless you’re generally a fan of literary fiction.

Have you had a chance yet to read An American Marriage? Let me know your thoughts about it in the comments, or what appeals to you about this book if it’s on your TBR!

5 thoughts on “Review: An American Marriage”