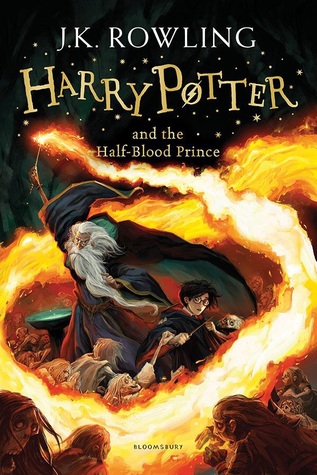 You might be surprised to see I’ve already read Harry Potter and the Half-Blood Prince considering what a disaster my reread of Order of the Phoenix was, but I not only read it, I enjoyed it waaaaay more than the fifth installment in the series!

Not going to lie, I was a little shaken after rereading Order of the Phoenix and was starting to question why I loved these books so much, but Half-Blood Prince really pulled me back into the fold. Harry is fortunately much less annoying, and I really like that we’re finally starting to learn more about Voldemort’s backstory and see where the conclusion of the series is going.

The trips to the Pensieve were definitely my favorite part of this book. Voldemort’s just been this huge specter throughout the series, and I really appreciated getting a look at the more human side of him and learning how he eventually came to be Lord Voldemort. The idea of the horcruxes is interesting, too, and it’s neat how they’ve been present in the series without the reader really knowing about them until now.

Beyond the plot advancements, I was really hooked by all of the romantic relationships going on in Half-Blood Prince. This book reinforced for me that I’m not a fan of Ron and Hermione together. I’m sorry to all of their fans!! But Hermione is really intelligent and dedicated to helping others, and I just think she deserves better than Ron. I like him as a friend to Harry, but he’s kind of mean to Hermione (though I didn’t notice him dismissing her intelligence like he has in previous books). I’m just genuinely not sure what she sees in him, and I’m not looking forward to the two of them finally being together in Deathly Hallows.

Honestly, though, Ron is kind of terrible when it comes to women, because I don’t think he treated Lavender that great either. Their relationship was hilarious and a nice distraction from the seriousness of the storyline. I’m debating getting my husband a copy of the gold chain necklace with the heart that reads “sweetheart” on it that Lavender got Ron for Christmas (see this tweet if you’ve forgotten that), but he doesn’t seem to be that into the idea for some reason. But like, I think she deserved to be properly dumped instead of for Ron to constantly avoid her and drag things out.

As for Harry’s relationships, I remember not liking him and Ginny together all that much in previous reads of the serious, but I actually liked them together a lot this time. Though I will say, what the heck happened with Cho?! After obsessing over her for ages, Harry’s interest in her seemed to die off a little quickly for me, but whatever. I’m all about Harry and Ginny now!

I will say, I thought Harry’s obsession with Draco was a bit much. It’s hard to say it was completely unreasonable when he was ultimately justified in the end, but when he had numerous people, including Dumbledore, telling him to leave Draco alone, you’d think he’d listen. Especially when his behavior was downright creepy towards a fellow classmate. So that got old after a while.

I feel like I can’t discuss Half-Blood Prince without discussing the Half-Blood Prince himself; I’m super impressed with Snape for being such a good potions master, though obviously he leaves a lot to be desired as a teacher. I will say, there’s really nothing like reading this book for the first time, because it definitely changes things to know Snape will kill Dumbledore and why. I can’t hate him as much as I did during my first read, though he’s still plenty awful and unlikeable! But I think Rowling does a good job setting up some of his backstory for the final book, as well. I can’t wait for it all to come together!

I know one of my major complaints for Order of the Phoenix was all of the holes in the creation of the wizarding world, and while I’m sure that was still an issue in Half-Blood Prince, I didn’t notice it nearly as much. It’s way easier to ignore when the book has a focused plot and the characters aren’t irritating me like they did in Order of the Phoenix. It keeps me too engaged to nitpick!

So yeah, Half-Blood Prince was a much more enjoyable reread than Order of the Phoenix! I’m excited to continue on with Harry Potter and the Deathly Hallows, but I think I need a bit of a break before continuing on with Harry Potter. There are just a bunch of other books I want to read right now, plus I need time to recover from Dumbledore’s death. It’s still hard to wrap my head around the fact that he’s gone! If I don’t circle back to this series yet in July, then Deathly Hallows will definitely be my August reread pick.

Where does Half-Blood Prince stack up for you in the Harry Potter series? I’m thinking for me it might be in third behind Prisoner of Azkaban and Sorcerer’s Stone, but I’m not entirely sure. Let me know what you think in the comments!