It’s time for another Monthly Recommendations post! If you’re not familiar with the Goodreads group, be sure to check it out here for even more recommendations. This month’s topic is underrated books.

It’s interesting, because I was scrolling through my Goodreads to come up with a list for this post, and I’m not sure I have very many I would recommend that I would truly consider to be underrated. As it turns out, most of the books I’m most excited to recommend are ones that the bookish community are already familiar with.

That said, I do have a few to share with you today! So let’s go.

I think The Displaced is truly the most underrated book I’ve read that I would highly, highly recommend. The subtitle says it best when describing this essay collection: “Refugee Writers on Refugee Lives.” It’s a really important look at what it means to be a refugee, and what a huge range of experiences are out there. I think Nguyen did a great job cultivating this collection, as it includes essays from writers from diverse parts of the world as well as at varied points in the refugee experience, including points where you might no longer call them refugees. It’s a really short book, but an incredibly powerful one, and I think everyone should pick it up.

This might seem like an odd choice for a list of underrated books considering how popular Leigh Bardugo is, but for all that everyone loves her Grisha books (for good reason!), I actually don’t see anyone talking about Wonder Woman: Warbringer, which is such a shame because I enjoyed it so much! I thought it was awesome how in Bardugo’s take, Themyscira is populated by women from around the world who cry out to any female deity upon their death, making for a really diverse and rich world. As with Bardugo’s previous books, I really like the cast of characters that make up this world, and Bardugo wrote in so many twists in Diana’s quest to save the world that I never saw coming. It was a really fun read that deserves more attention than it’s gotten!

In the Garden of Beasts by Erik Larsen

It’s hard to say anything by Erik Larsen is all that underrated because I still hear him mentioned fairly frequently, and I’m sure people will be all over his next release. But while people are quick to mention Devil in the White City, I don’t hear nearly as many people talking about In the Garden of Beasts, which I personally liked even more. This is a nonfiction book following the American ambassador to Germany’s daughter in the lead up to World War II. It was such a unique perspective to a time period that I already know fairly well, and I was both surprised and incredibly impressed by this book.

Notorious RBG: The Life and Times of Ruth Bader Ginsburg by Irin Carmon and Shana Knizhnik 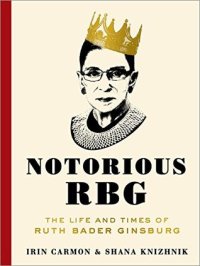 I know a lot of people really enjoy the Notorious RBG meme, but very few people have actually read the book that the creator of the meme put together. And that’s such a mistake, because this book is awesome. It’s a great look at an absolutely amazing woman, and I really liked how they created such a rounded image of her, from annotated excerpts from her briefs and opinions to photos and memes and even her workout and a recipe from her late husband. It’s a really short but powerful read that’s both fun and fascinating, and I highly recommend it.

Trail of Lightning by Rebecca Roanhorse

Trail of Lightning is still a pretty new release, so I’m not sure I can really call it underrated. But while I’ve heard a lot of people talking about how excited they are for this book, I haven’t seen very many actually pick it up, which is a shame because this book is awesome! All you need to know is that it involves monster hunting and Navajo mythology. What more do you need to pick up this book? It was such a rich and engaging read, and I loved the characters and the world that Roanhorse created. I can’t wait for the next book in this series!

Have you read any of these books? What underrated books do you think I should check out? Let me know in the comments!