I’ve been making progress on my stack of arcs from Book Expo and RWA, so I figure it’s time for another roundup post! This time I’m featuring three upcoming YA releases: a scifi, a fantasy, and a contemporary. Keep reading to see what I thought about these popular upcoming books!

For some reason I thought Mirage was a Moroccan-inspired fantasy, but it’s actually a science fiction book, which almost makes it even cooler. It follows the story of Amani, who finds herself caught up in court politics and intrigue when she is plucked from her small village and forced to pose as the body double of the crown princess. As if any royal court wouldn’t inherently be complicated enough, Amani is thrown additional challenges because her empire was conquered by the cruel Vatheks when she was younger, and she must balance trying to please the Vatheks while remaining true to her culture.

I really enjoyed the first half of this book and thought it was shaping up to be an excellent read. It was such a lush yet brutal world and I was fascinated by it, as well as the court politics and the cultures of the two warring peoples. But about halfway through the book, Amani made an idiotic decision over a boy. Never mind self preservation and learning to be clever in a cruel world, she remained incredibly naive and made what I thought was a massive mistake. And after that, it was pretty much impossible for this book to recover for me. With such high stakes, I just had no patience for the instalove between Amani and her hero.

I also thought the worldbuilding proved somewhat inconsistent as the story progressed. It started out super brutal and cruel and I was preparing myself for lots of twists and turns that I didn’t see coming, but instead the story took a fairly predictable path and really backed off the brutality as it continued.

Mostly I’m just disappointed. I really enjoyed the first half of this book and thought Daud created a stunning world with a fascinating premise, and it had the potential to be an amazing read. And then it just petered out and went typical YA. I can think of a million developments that would have been fascinating to see play out, but instead this story went the safe and boring route. I’m interested in seeing where the story continues in the next book, because I think there’s a chance it can be redeemed, but I guess we’ll see.

Mirage will be released on August 28 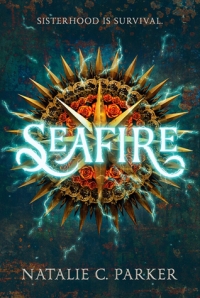 Seafire is a fantasy story about lady pirates, and I’m really not sure you need to know much more about it to pick it up. When Caledonia’s family is killed by a corrupt warlord, she and the only surviving member of her ship form a crew of their own comprised solely of women, and as a team, they work to take down the warlord’s fleet one by one. But when a boy saves one of them and is brought aboard the boat, everything on the ship changes, and Caledonia is forced to decide whether to trust him to help take out the warlord once and for all or risk being betrayed.

Full disclosure, I actually DNFed Seafire after 130 pages, or about 35 percent of the way through the book. It wasn’t bad, I just thought it was ok and wasn’t excited to keep reading it. There was something about the narrative style that just didn’t jive with me, plus I was having a hard time getting a read on Caledonia and generally just didn’t like her all that much. It also felt like nothing was really happening in those first 130 pages, so I decided to skim the rest of the book and move on. As it turns out, I’m totally happy knowing the general lines of the story but not actually reading it in its entirety, and I have no plans to go back and finish this book or continue the series. If you really like pirate stories and fantasies with strong feminist themes, you might enjoy this, but it just wasn’t for me.

Seafire will be released on August 28

Meet the Sky by McCall Hoyle

In Meet the Sky, Sophie finds herself with a lot of weight on her shoulders: her father has left her family after getting in an accident with her older sister that resulted in a traumatic brain injury, and her family is struggling to stay afloat without him. So the last thing she needs is for the reckless Finn to walk back into her life after standing her up at a high school dance several years prior. But when Sophie and Finn find themselves caught alone in a hurricane, Sophie is forced to reevaluate her life and decide whether to let people back in after being so closed off for so long.

This isn’t the kind of YA I typically gravitate towards, but I really enjoyed speaking with the author at the RWA Blogger Day, so I grabbed an arc when I saw it. I think it’s a well written and well told story, it’s just not what I normally prefer to read. I found the events leading up to Sophie getting caught alone in the storm with Finn surprisingly believable, though I still blame him and kind of want to smack him for it. But I liked seeing Sophie start to examine her life more closely and watching the two of them open up to each other. I found myself constantly pulling this book out when I had a few minutes just to sneak in a few more pages, and overall I really enjoyed it. So if you like heartfelt and angsty YA contemporaries, especially ones with a survival element, you should definitely check this one out.

Meet the Sky will be released on September 5

So overall this batch wasn’t quite as successful as the fantasy books I read earlier this month, but I’m glad I gave them all a chance! I’m hoping that the Mirage series will improve as Daud becomes a more experienced writer, and I really want to go back and check out Hoyle’s debut novel since she want a prestigious RITA Award for it.

Have you been anticipating any of these books? Which one are you most intrigued by? Let me know in the comments!

3 thoughts on “YA Arc Roundup: Mirage, Seafire, Meet the Sky”