So I had intended to keep my December TBR pretty short in order to give myself the freedom to read whatever I feel like, and yet it still somehow wound up being pretty long? What the heck? 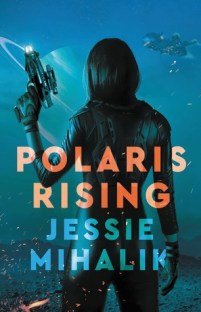 Like last month, I really want to focus on getting through my ARCs. I have two February arcs: Polaris Rising by Jessie Mihalik (February 5) and The Priory of the Orange Tree by Samantha Shannon (February 26).

Polaris Rising is the first book in a science fiction romance trilogy that I got as part of the Avon Addicts program, and while I was skeptical when I first saw, I actually think it sounds pretty awesome. It’s a space opera following a space princess and an outlaw (Star Wars vibes much), and I think it’s going to be great. I can’t wait to read it!

I’m also really excited to read The Priory of the Orange Tree, a feminist fantasy full of dragons that was the talk of Book Expo this past spring. I’ve been seeing it all over social media ever since, and while I think I’m going to really enjoy it, I have to admit I’m pretty intimidated by its size: It’s 850 pages! It’s literally two inches thick! And if you saw my post about the longest books I’ve read, this one will wind up coming in at number eight! So I’m definitely more than a little intimidated to start this, but I’m also really looking forward to it.

My other focus I’d really like to stick with is to read the books I’ve recently acquired. I’ve been pretty good about cutting back on my book acquisitions, and I think making myself read books as I accumulate them has definitely helped, so I want to keep it up. I have two books: Next Year in Havana by Chanel Cleeton and The Smithsonian’s History of America in 101 Objects by Richard Kurin.

I’ve been tempted by Next Year in Havana for a while, especially when it was named one of Reese Witherspoon’s book club picks and it was literally all over my Instagram feed. And then Jenica at Firewhiskey Reader couldn’t stop raving about it. So when I saw that someone had left it behind at one of the hotels I stayed at during my vacation last month in Spain, I had to take it home with me!

The other book, The Smithsonian’s History of America in 101 Objects, is something that my mother-in-law gifted me, and it’s so up my alley that I started reading it immediately. I’m already a decent way into this; it’s a long book, but I think I’ll get through it quickly because there are so many pictures. Like the title says, it’s a look at American history through the lens of 101 objects that the author chose as representative of key points of American history. It’s got all sorts of neat factoids in it, and I’m really enjoying it. I’m also really itching to make a trip back to the Smithsonian sometime soon! I don’t think I’ve been since I interned in DC during college.

I’m also hoping to read a few Christmas romances in December. I’m really excited for Alexis Daria’s Dance All Night, a Christmas novella set in the Dance Off world, and I’ve somehow managed to restrain myself from reading How the Dukes Stole Christmas by Sarah MacLean, Sophie Jordan, Tessa Dare, and Joanna Shupe since it came out in October. This anthology, which consists of four interconnected Christmas novellas set at different points in history, includes stories by some of my favorite authors, so I’m really looking forward to this one!

Where I’m really starting to get ambitious, though, is in my hopes to finish everything I have marked as Currently Reading on Goodreads.

I’m not worried about finishing Code Talker: The First and Only Memoir by One of the Original Navajo Code Talkers of WWII by Chester Nez; I’m about two thirds of the way through the audiobook and will definitely be finishing it soon.

I’m also sure I’ll either finish or DNF The Girl King by Mimi Yu. I was really looking forward to this Asian fantasy involving shapeshifters, but I’m more than 120 pages in right now, and I’m just really bored. I’m trying to push myself to at least read to the 150 page mark before deciding, but I’m not even motivated to make it that far, so we’ll see what happens.

I’ll also either finish or DNF Not That Bad edited by Roxane Gay. I was doing ok when I put it down to take a break and read something else, but I picked it up again during Nonfiction November and just realized that these essays are really abstract and overly literary for my taste, and I don’t feel I’m getting as much out of it as I should (or as I wanted to). But we’ll see.

Then there’s Rebecca by Daphne du Maurier. I started this book in June and just wasn’t enjoying it, and I tried to make myself read a little more last month before DNFing it, but I just couldn’t bring myself to read it or DNF it. I’ve just heard so many great things about it and it’s considered one of the most beloved books of all time, but I have no motivation to pick it up. So it’s now or never. I’m either going to start reading it again in December, or DNF it.

The First Tycoon: The Epic Life of Cornelius Vanderbilt by T.J. Stiles has also been hanging out on my Currently Reading shelf for way too long. I’m sure once I get into this book, I’ll really enjoy it, but I just haven’t been able to make myself commit to such a massive biography. I really do want to read this, though, and it’d be great to go into 2019 with a fresh Currently Reading slate (and one less massive biography on my TBR shelf), so I’m hoping to make it through The First Tycoon in December.

See what I mean about being overly ambitious? That’s a lot of reading! Even if I wind up DNFing all the books I’m contemplating DNFing, there are some big books on this list. If I only make it through the arcs and my recently acquired books, though, I’ll be happy. Finishing off the rest of these will just be a bonus!

What books are you looking forward to reading in December? Let me know in the comments!