I have another batch of arc reviews to share with you today! This post includes my thoughts on the latest from Eloisa James and Sarah MacLean, plus a fantasy book that I know is going to be one of my favorite reads of the year!

Say No to the Duke by Eloisa James (June 25)

Say No to the Duke is the fourth book in Eloisa James’ Wilde series featuring a big, boisterous family as they each find love. This book is the first one featuring a Wilde sister, following Betsy as she attempts to go on an adventure before settling down and accepting a proposal from a duke. While she and her brother’s friend Jeremy don’t exactly get along, she convinces him to help her on her adventure, and eventually he realizes he has to convince her to say no to the duke.

I’ve really been enjoying the Wilde series, I thought this was a solid addition. It didn’t wow me like the first two did, but it was a huge step up from the third one. The Wilde family is just so great, always looking out for each other while also giving each other a hard time, and I loved seeing Betsy and Jeremy realize their feelings for each other. Also, Thaddeus’ mother was amazing, and I loved that she supported Betsy on her adventures (and Aunt Knowe, of course!). I enjoyed this book even if I didn’t love it, and I’m excited to see what else James has in store for this series.

I received an arc of Say No to the Duke at KissCon.

For starters, Protect the Prince is the sequel to Kill the Queen, which you absolutely have to read first (you can check out my thoughts on the first book here). Given the title of the first book, it shouldn’t be much of a surprise that Evie, after watching her extended family murdered in a plot to take over the throne, does in fact eventually kill the queen. But just because you know where the first book is headed doesn’t mean you can’t thoroughly enjoy the journey. And the best part is that the series doesn’t end there! Instead, it connects into a much wider plot and gets a lot more political in book two.

Protect the Prince is one of those rare books that I pretty much immediately started rereading as soon as I finished, so you don’t have to worry about whether or not it’s a good addition to the series! I really enjoyed seeing Evie’s character develop and learning more about the world that Estep has created, and of course I loved seeing her relationship with Sully grow. As I mentioned in my Mid-Year Book Freakout Tag, there’s a scene between the two of them that I think is one of the most romantic moments I’ve ever read in a book, or at least in a while.

Basically, this book was so good that I went back and started skimming through my favorite parts. And then started doing the same for Kill the Queen. Seriously, I’m probably going to have to reread these books once I pick up a finished copy of Protect the Prince. The wait for Crush the King is going to be such torture!

I received an arc of Protect the Prince from the publisher via Edelweiss.

One Fine Duke follows Mina as she pursues marriage to a young rake in order to secure her freedom from her uncle. Only she keeps getting thrown together with said rake’s older, reclusive brother. While Drew doesn’t fit in to Mina’s plans at all, she can’t help but be drawn to him and struggles with whether to give up the goal she’s been working towards for so long and pursue a new one.

For some reason, this wasn’t my favorite from Lenora Bell. I enjoyed it and don’t really have any specific things I didn’t like, but I didn’t love it or get swept up in it the way I have with a lot of her previous books. I think a lot of that is because Mina’s original plan to get married didn’t make the most sense to me, and she clung to it much longer than I thought she should, but honestly, I don’t remember it well enough at the time I’m writing this review to really say one way or the other. I’m still a big fan of Lenora Bell, but this particular book wasn’t all that memorable for me.

I received an arc of One Fine Duke from the publisher via Edelweiss.

Brazen and the Beast by Sarah MacLean (July 30) 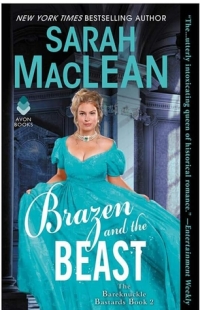 Brazen and the Beast is the second book in Sarah MacLean’s Bareknuckle Bastards series. This one focuses on Whit, who’s attacked one night when delivering smuggled goods and wakes up in Hattie’s carriage. Hattie has plans, plans that don’t include Whit getting in the way no matter how handsome she thinks he is. So she tosses him out of her carriage and proceeds on her way. Only Whit isn’t done with her, and the two continue to clash again and again, slowly but surely falling in love.

I’ve been a longtime reader of Sarah MacLean’s and I love all of the ways she supports the romance genre, but I really haven’t been the biggest fan of her last few books. So while I will never not read her books, I wasn’t expecting to especially love Brazen and the Beast. As it turns out, I was beyond pleasantly surprised as I really loved this book! Hattie is just such a wonderful character who’s fighting for her right to run her family business when she’s clearly more suited to the job than her brother, and Whit is the gruff, silent hero who can’t help but be drawn to her. It’s such an amazing combination, and it was so satisfying to watch them fall in love with each other and accept that they deserve love. This book was delightful, and I highly recommend it.

And while I’m really not a big fan of second chance romances or super angsty books, I can’t help but be super invested in the two characters at the center of the third book in this series!

I received an arc of Brazen and the Beast at BookCon.

Last but not least, I did want to mention my thoughts on The Marriage Clock, which was one of the arcs I received at KissCon. Considering it was given out at a romance conference, I assumed this would be a romance. As it turns out, it’s not. I started reading this and was enjoying it well enough for the first 30 pages, when we’re introduced to Leila’s first suitor proposed by her parents. I didn’t think he’d be the hero, but I was curious what the hero’s name was so I’d recognize him when he was introduced, so I flipped to the end. And in my skimming of the ending, I realized there isn’t a happily ever after in this story—pretty much the number one requirement for a romance. For a lot of people, that probably won’t be a deal breaker. But I was expecting a romance, and without one, I wasn’t all that interested in this book, so I decided to go ahead and DNF it and pass the arc along to someone else who will enjoy it more.

I received an arc of The Marriage Clock at KissCon.

There you have it! All in all a solid batch of books for this wrap up. Do you have plans to pick any of these up? Which one are you most excited for? Let me know in the comments!

4 thoughts on “Arc Roundup: Say No to the Duke, Protect the Prince, One Fine Duke, Brazen and the Beast”