With the annual Romance Writers of America conference in town this past week, there were a plethora of amazing romance events to go to! I tend not to write recaps of book signings I go to these days, but I’m so excited about all of the events I went to last week that I couldn’t not write a post (or two) about them all!

I didn’t sign up for the full RWA because I’m not an author, and it seems like that’s more what the conference is targeted towards. But I did sign up for the RWA Blogger Day and was planning to do a recap of that like I did last year, only these other events were just so fun that I had to write about them, too. So today’s post will be about the various events I did during the week, including a tour of a Gilded Age club and a game night, and tomorrow’s post will be about Blogger Day.

The first event that kicked off the week was an Avon panel on Tuesday at Barnes & Noble featuring Julia Quinn, Sarah MacLean, Lenora Bell, Alyssa Cole, and Nisha Sharma. I was especially excited that Lenora Bell was there, as she’s the only one of the authors I haven’t met yet, but I was generally anticipating this panel just because I’m a fan of all of the authors. It was a fun panel, and you can see some clips on social media here. But the highlight for me was definitely talking to some of the other readers in the audience! I love meeting other people who love romances as much as I do, and it was a lot of fun.

Also, I suspected I might run into Jessie Mihalik there since Polaris Rising was published by another HarperCollins imprint and I first read it through the Avon Addict program, and I was right! She was there! So I was able to get her to sign my book for me as well.

The next event I attended was a Wednesday tour of the Players Club, a Gilded Age social club, with New York historical writers Joanna Shupe and Maya Rodale. I think it’s such a fun idea for an event, to tour an actual historical location with some of your favorite historical romance authors. I’m really hoping this place pops up in Shupe and Rodale’s next books! I can’t say I was all that interested in the tour of the Players Club itself—I think it’d be a lot more interesting if you enjoy theater history and portrait art. But it was still a beautiful old home to tour, and I really enjoyed meeting other romance readers. I even got to catch up with a friend from KissCon who was in town for the conference (hi Casey!).

After the tour, they gave us goodie bags that included both authors’ most recent releases, plus coasters from each author. Rodale also had this really fun postcard in there from her current series. Then the authors took us to an old Gilded Age bar nearby, where we got to hang out a bit longer and discuss more romance. I’ve never done a book event like it, and I thought it was such a great idea. I’d love the chance to do something like that again in the future!

On Thursday, I attended a game night at The Strand with Alisha Rai, Sonali Dev, Melonie Johnson, Helena Hunting, and Lauren Layne. I’ll admit, I was a bit skeptical about the game concept and didn’t think I’d enjoy it nearly as much as a regular panel, plus getting into the event was a total disaster. The line to get in was moving super slowly, but they kept sending up elevators full of people, only there was no room for people to actually get off the elevator. I think the technical term for the whole thing, if you’ll pardon my language, was a clusterfuck.

Fortunately, though, once they got us all into our seats, things settled down, and the event itself was a ton of fun. They did a round of Never Have I Ever and then a round of Would You Rather, all while audience members were trying to get a bingo from whenever authors said words like “hero” or “romance” or “feminist.” Sarah Wendell from Smart Bitches, Trashy Books moderated, and she did a great job with it. The questions were a lot of fun, and I enjoyed how she’d spotlight a few authors and make them share the stories behind their answers. I never did get a bingo, but I still had a great time at the event. And I picked up an early finished copy of The Right Swipe by Alisha Rai! If you’re interested in checking out this event, The Strand has posted a video of it here.

And last but not least, I went to Avon’s Kisscon Delights event held in the Avon offices on Friday afternoon with Jennifer L. Armentrout, Meg Cabot, Christy Carlyle, Lorraine Heath, Sophie Jordan, Cat Sebastian, and Mia Sosa. Not going to lie, it is very cool going to an event at a publisher’s office, though I’m a terrible blogger and really didn’t take all that many pictures (though if you haven’t noticed, the same can be said for all of these events, really). The event started out with a wine and cupcake mixer (technically there was cheese and other stuff, but I zeroed in on the cupcakes). It’s pretty surreal standing there talking to someone and then have Meg Cabot stop and starting talking with you! 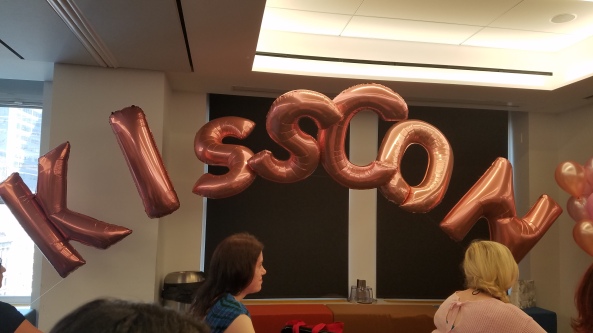 Eventually we moved into the conference rooms, where we got our swag bags and they started the panel. The authors started out with Speed Round, where they had to answer a bunch of random questions, and it was so fun to see what they’d come up with and what random stories they had to share, and eventually transitioned into a game of Never Have I Ever. Can I just say how weird it was to hear Meg Cabot talk about her first romance, when she was my first romance? (She Went All the Way!) At the end, they did audience trivia so we could win some pins. Shockingly, not a lot of people raised their hands when asked what two political households were united in Red, White and Royal Blue by Casey McQuiston, so somehow mine was the first hand up? Basically, I’m not sure how I managed to win this pin, but it is awesome and I am very glad I did.

In addition to the swag bags, which included two arcs (I’m so excited to read the new Talia Hibbert book!), I used my book coupon that came with my ticket to pick up the last book in Mia Sosa’s Love on Cue series, which I’ve really been enjoying, as well as an early copy of Lorraine Heath’s new release, The Duchess in His Bed (out August 20). I also had to grab a copy of The Princess Diaries when I saw it on the table of books. While I read a lot of Meg Cabot books growing up, The Princess Diaries really wasn’t one of them (I got my childhood books signed last year, btw). But it’s such an iconic series and I love the movie, so how could I pass up an opportunity to get a signed copy? 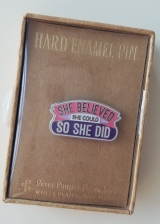 It’s probably a good thing we don’t have enough book events in the city that I’m interested in to sustain this kind of pace because it’s rather exhausting to go to events every day, but I had such a fun week attending them all, getting my books signed, and connecting with other romance readers! And that’s not even everything, since I capped the week off by attending the RWA Blogger Day and Literacy Signing on Saturday. Stay tuned for tomorrow’s post for more details!

3 thoughts on “RWA Recap: Panels and Signings and Games, Oh My”

I'm so excited there's a new Erik Larson book out in the world, and it was super cool to be able to attend his talk and book signing earlier this week! #newbookrelease #thesplendidandthevile #bookhaul #bookstagram
I'm so glad I was able to make it to Galentine's Day last night at Word! It was such a fun event, and I was super excited to use my ticket to get a copy of American Dreamer by Adriana Herrera! I loved her GBBO-inspired holiday novella, Mangoes and Mistletoe, and I keep hearing great things about her other books, so I can't wait to dive into this one!!