It feels more than a little surreal to be talking about book reviews, but romances bring me a lot of joy right now, and I hope they can do the same for you. Keep reading for reviews of a new contemporary from Alisha Rai, Julia Quinn’s latest historical, a reverse-rake historical from Scarlett Peckham, and the latest installment in Amanda Bouchet’s sci-fi romance trilogy.

Girl Gone Viral is a contemporary body guard romance with lots of mutual pining! Former model Katrina withdrew from the public several years ago, but is trying to get more comfortable leaving her home. When someone live tweets an exchange of hers at a cafe that goes viral, she panics and worries about people trying to track her down. So her bodyguard Jas comes to her rescue, sweeping her away to his family home on a peach farm. Jas has been in love with Katrina for years, and the remote setting makes it even harder for him to hide his feelings. What he doesn’t realize is that Katrina has been in love with him for a long time, too, so of course a romance is going to develop!

Alisha Rai just writes her characters so well. I loved all of the mutual pining in this book, and it was so satisfying to see Katrina and Jas finally give their relationship a try. I just really needed both of them to be happy! I also really loved seeing Jas reconnect with his family and thought it was really cool how Rai worked in history about Indian farmers in California. I am 100 percent here for all random history lessons, and this is an especially cool one. I also think Rai does an excellent job weaving social commentary into her books, and Girl Gone Viral is no exception. I thought her take on tweeting other people’s conversations and how people went after Kat is so spot on, and I really liked how she showed that live-tweet situations that seem cute and romantic aren’t as much fun as people seem to think they are. Basically, I’m a really big fan of Alisha Rai’s, and I think Girl Gone Viral is another excellent book from her!

I received an arc of Girl Gone Viral from the publisher via Edelweiss.

Another Bridgerton book! First Comes Scandal is the next installment in Julia Quinn’s Rokesby series, though the heroine of this one is another Bridgerton. Georgie Bridgerton’s life takes a turn she wasn’t expecting when a man kidnaps her for her dowry. Now she faces a life as an outcast spinster unless she marries the villain. Nicholas Rokesby doesn’t particularly want a wife yet, but he can’t let his childhood friend face ruin. So he offers to marry her, but Georgie doesn’t want to be a sacrifice and turns him down. Plus they’re friends and not at all attracted to each other. But the more the two of them think about it, the more they realize there’s something more between them than either of them realized.

Ok, I’m pretty biased when it comes to Julia Quinn, so please keep that in mind when reading this review. But I seriously loved this book! It was the perfect cute, fun, low-angst read to pick up in the current environment, though I totally would have loved this any time. This book has the signature Bridgerton humor, and it was so adorable to read about Georgie and Nicholas slowly realizing they could be more than friends, and then eventually falling in love. Plus he’s a unicorn virgin hero, if that’s interesting to you! I will say, there was so little conflict in this book that it was almost too little even for me, and I’m one of those readers who doesn’t usually mind no conflict! But it was a lovely, low-angst book, and I suspect others will find comfort and joy in it, too, both from the sweetness and humor of the story and the familiarity of sinking back into a Julia Quinn novel.

I received an arc of First Comes Scandal from the publisher via Edelweiss.

The Rakess by Scarlett Peckham (April 28) 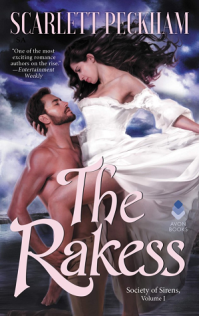 The Rakess is Scarlett Peckham’s debut with Avon, and it has SUCH a stunning cover! The important part is the book, though, and this one seeks to turn the alpha hero on its head by featuring a heroine who’s a rake. Seraphina has been outcast from polite society ever since her affair with a local lord was discovered. But rather than feel ashamed and going into hiding, she transformed herself into a scandalous and outspoken activist for women’s rights. In order to raise funds for her cause, Seraphina has returned to her childhood home to write her memoir, running into widower and father-of-two Adam during a walk on the shore. Adam finds himself unable to stay away from Seraphina, and the two agree to embark on an affair. But as they come to mean more to each other than either of them anticipated, ghosts from their pasts come back to haunt them.

Wow, this is a tough book to review. It just does SO MUCH. Scarlett Peckham is seriously a phenomenal writer, and she’s playing with the genre in such interesting ways. Her author’s note that starts out this book is amazing, pointing out how men are celebrated as rakes when they enjoy having sex, but women are always cast as the fallen woman. She really turns a lot of common tropes and conceptions on their head, and I love seeing her push the genre forward like this.

That said, I’m not sure I really liked this book. It’s very high angst, both in each character dealing with personal things in their own histories and in their developing relationship with each other. Seraphina really isn’t nice to Adam at all, and while I completely understand why, it still hurts to read. Though frankly, I’m not entirely sure why Adam kept coming back after a certain point. I’m also not entirely sure why he even needed to have children considering how little they played in the book, and honestly, I couldn’t disagree with Adam that he was kind of being a terrible father by working nonstop and then spending his free time with Seraphina instead of his kids. Seraphina also wasn’t around the kids all that much, and I had little to no concept of how their relationship would actually work once they got their HEA. It was really more of a HFN, though the epilogue points to it being an HEA, but we just missed so much between those two points that I didn’t get the usual happy feeling I get at the end of a romance novel.

SPOILER AHEAD. I want to be clear, my lack of reassurance in their HEA has nothing to do with them not getting married. I actually think that move makes complete sense, and it would have cheapened the rest of the book if they had gotten married. But like, how does Seraphina fit into Adam’s family? What does his sister think of the relationship? Is Seraphina able to stop drinking or does she relapse? How does Adam handle that considering his past with his father? I have so many questions and no answers. END SPOILERS.

Honestly, I think there was just too much going on and too many pain points for me to ever sink into this story, and to add the boundary-pushing elements on top of it just pushed it over the edge for me. I do want to reinforce, though, that I think this is incredibly well written, and I can’t wait to see what Scarlett Peckham does next.

Oh, and if you’re interested in content warnings, please check out this review from Beth. There are a lot for this book, and she does a great job identifying them.

I received an arc of The Rakess from the publisher via Edelweiss. 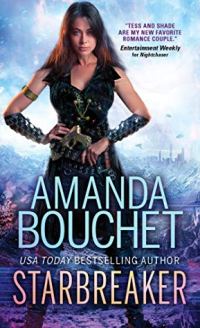 Starbreaker is the highly anticipated sequel to Nightchaser, a fun sci-fi romance between a Robin Hood-like thief and the bounty hunter out to catch her. Now the galaxy’s Most Wanted, Tess and Shade must complete an impossible mission to rescue a renowned scientist in order to aid rebel leaders in their fight against the Dark Watch.

I was really looking forward to this book because I enjoyed Nightchaser so much, but I cannot for the life of me bring myself to finish it. It’s so weird! It became very apparent as I started Starbreaker that I remembered nothing from book one, but I thought it’d come back to me eventually. It never did, though, so I put the book down assuming I just wasn’t in the mood for sci-fi romance since I was trying to read this when stay-at-home orders first started going into effect and I was craving historicals. But I found myself reluctant to pick it back up again, and despite being more than 100 pages in, I’m still not hooked on this book, either as a sequel to Nightchaser or in its own right. There just hasn’t been much of a plot yet that I’ve been at all invested in, and I don’t really care for reading about Tess questioning Shade’s past decisions and frequently making him defensive. It’s probably best for them to sort that out as part of their relationship, but when I don’t really remember them from book one, I really don’t want to read about it.

I did ultimately decide to DNF this book, but I’m hoping that other people’s excitement about it will motivate me to push past where I am and finish it. After all, my preordered paperback copy is already here, and I’d feel really weird not finishing it! I’ll try and make sure to come back and update this post with my thoughts if I do wind up finishing it at a later date.

I received an arc of Starbreaker from the publisher via Netgalley.

Have you been anticipating any of these books? Which one would you pick up first? Let me know in the comments!