Hello again! I’m back with another arc roundup, this time focused on a couple of new summer historicals! Keep reading to see what I think of the latest releases from Lisa Kleypas and Julie Anne Long! 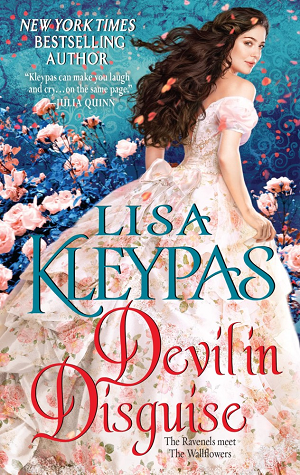 Devil in Disguise returns to the world of the Wallflowers with Lady Merritt Sterling, the daughter of Lillian Bowman and Marcus, Lord Westcliff, from It Happened One Autumn. Merritt has stepped in and taken over the management of her husband’s company after his untimely death, and she isn’t prepared for her visceral attraction to Keir MacRae, a distiller who approaches Merritt about troubles storing his whiskey in her warehouse. The two find it impossible to stay away from each other, even knowing they don’t move in the same circles of Society and that a relationship between the two of them is impossible. To complicate matters further, someone is trying to kill Keir, and the only person he can trust while trying to figure out who wants him dead is Merritt.

I mean, look. Lisa Kleypas knows how to write a story! I enjoyed this one so much, I stayed up way too late reading it. I told myself I’d go to bed after the mysterious circumstances around Keir’s parentage were revealed, but by then I was so invested in how he and Merritt would make their relationship work that I couldn’t put it down. Poor decisions were made that night, but I have no regrets! This is definitely a little more insta-love than I prefer, but they’re just so compelling together that it’s hard not to get swept up in their relationship. I just wish we’d seen more of a foundation built between them later in the story, but I can’t say its lack ruined my enjoyment.

It was also immense fun to see some of the Wallflowers in this book, though I was disappointed we didn’t get any of the Hathaways! I worry sometimes about authors constantly returning to old faves because I want a chance for them to branch out and create new faves (and sometimes I just want a break from those beloved favorites), but at the end of the day, I’m here for it every time. Sigh. Also, I now want romances for Merritt’s siblings, especially her brother Luke!

The one thing that definitely did ruin my enjoyment, though, was the epilogue. It’s not a huge part of the story, but Merritt believed herself to be barren, having even visited a doctor who said lesions on her uterus (or something to that effect) made childbearing incredibly dangerous for her. I liked how it was handled when she discussed it with Keir (I won’t spoil that!), but I really hated that she had a magical pregnancy after all. Seriously, just cut out the hints of her pregnancy at the end and come up with a completely different epilogue, and I would have been way happier. I’m so over the concept of the woman believing herself to be barren because she didn’t have any children with her first husband, only to find out that’s not true with the hero of the current book. Just let them have a childfree HEA!

I also thought the drama of someone wanting Keir dead was wrapped up a little too quickly and neatly at the very end of the book, but I was mostly reading for Keir and Merritt and the Wallflowers anyways, so again, it didn’t ruin my enjoyment. All in all, this is a solid addition to Kleypas’ oeuvre, and I think longtime fans of hers will be happy with it. Just stop with the magic babies!

I received an arc of Devil in Disguise from the publisher via Netgalley. 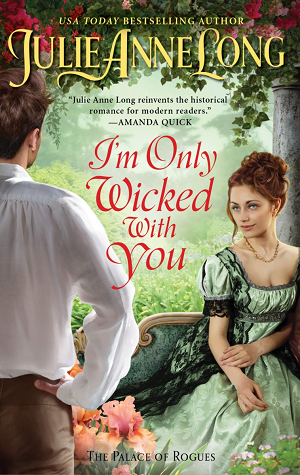 I’m Only Wicked with You returns to the delightful Grand Palace of the Thames, where Lady Lillias Vaughn is staying with her family after an unfortunate mishap at their family home. Also staying at the hotel is Hugh Cassidy, an extremely attractive American who is there as part of a bid to build his own empire. The two immediate lock horns after Hugh finds Lillias smoking outside and tells her father. But they can’t deny their attraction to each other, loathe as they are to admit it, and when the two are found in a compromising position, they’re forced to marry.

I was so looking forward to this book because the first two in the series were some of my favorite reads of 2020. So even though I’m trying to cut back on requesting arcs, I requested this one. And then I started reading it, and it was…not great. I made it about a third of the way through (37 percent, to be precise) before I finally decided to just DNF it.

Literally nothing happened in the part that I read, and I didn’t particularly care for either protagonist. Both of them are apparently the most beautiful people ever, which is never a characteristic I particularly care about, and both seem to use it to their advantage. Furthermore, the hero seems to genuinely hate his attraction to the heroine, who he sees as manipulative and reckless, and is rather mean to her. And frankly, her POV doesn’t really dissuade you of that assessment. She’s dreading an upcoming ball for some mysterious reason, but we don’t really know the details. We just know she’s really unhappy with her life and acting out, but not why. I don’t particularly like either main character, to be totally honest, and their dynamic was a bit of a turnoff.

I might have been able to keep reading if there had at least been a plot, but with the absence of a plot, an engaging attraction between the hero and heroine, or even likable protagonists (the side characters are great, though), I just didn’t see the point in continuing to read this book. I was so surprised because this is not at all what I expected after reading the first two books in this series, and the setup for this one at the end of book two seemed so promising. But reading some other reviews of the book just confirmed that I was not going to end up liking this one, so I decided to put it down and give a review on what I did read. Sadly, this book won’t be joining the rest of the series on my shelves, though I will absolutely be giving the next one, After Dark with the Duke (how is this already out in November??), a try.

I received an arc of I’m Only Wicked with You from the publisher via Netgalley.

I’m so incredibly disappointed I didn’t love the new Julie Anne Long, but at least Lisa Kleypas is as compelling as ever! Are either of these books on your radar? Let me know in the comments!

One thought on “Arc Roundup: Devil in Disguise and I’m Only Wicked with You”