My list of most anticipated fall books is shockingly small this year! Don’t get me wrong, there are lots of books on my radar that come out in the next few months that I’m looking forward to reading. But only four that I’m eagerly anticipating and have preordered! 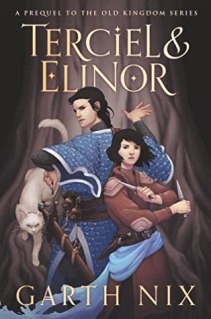 I am especially looking forward to a new Old Kingdom book from Garth Nix because I’ve really enjoyed rereading them with my husband on road trips over the past year. I can’t say that the story of Sabriel’s parents is the one I was most hoping Nix would tell next, but he hasn’t let me down yet!

Omg, I can’t believe I almost forgot to include Peter Cabot Gets Lost! I have it preordered, but it wasn’t on my Goodreads, and I only saw it when I went looking to make sure I didn’t forget anything. I’m always a fan of Cat Sebastian’s books, but I’m especially excited to see her writing in a different time period! I do really want her to go back to her Page & Sommers series set in post-WW2 England, but I’m excited to read more 1960s American historicals from her, especially because it’s a time period we basically never get!

The Brightest Star in Paris by Diana Biller (October 12)

I’ve been looking forward to The Brightest Star in Paris ever since I read The Widow of Rose House as an arc! I immediately became obsessed with Sam’s family, and I desperately needed his brother and sister to get their own books, so I’m beyond excited that this is Benedict’s story! Plus how cool is it that we’re going to nineteenth century Paris? My only complaint is that I wish the cover of this one matched the style of the first, but regardless, I’m beyond excited to finally read this book!

As much as I love Nalini, a Guild Hunter book has never been one of my most anticipated, and I don’t think it ever will be again. But this one! Ugh, the wait for October 26 is torture. Aodhan and Illium are both such special characters in the series, and I always got the impression these two friends would end up together, but I was never positive. So I’m beyond excited that Nalini is in fact giving me what I wished for with Archangel’s Light!! Also, how stunning is that cover?? Seriously, this quickly turned into one of my most anticipated books for the entire year once it was announced, and I can’t wait to read it.

All the Feels by Olivia Dade (October 26)

I’m fairly certain a new Olivia Dade will always wind up on my list of most anticipated books, especially when they have covers like All the Feels! I really enjoyed the first book in this series, Spoiler Alert, and couldn’t wait to read Alex and Lauren’s story given the setup in the first one. I’ve already read (and reviewed!) this one, and I’m excited to say it has all of Dade’s signature banter, humor, and tender care in it. I can’t wait for everyone else to read this book, too!

So yeah, those are the handful of books I have preordered and am beyond excited to finally read! We made it up to five after I remembered the new Cat Sebastian, but it seems like so much less than normal, especially for fall, which is usually a big season.

I think part of it is that there are three books that would normally be on my list of most anticipated but aren’t. Lenora Bell and Joanna Shupe are longtime favorites of mine, but I DNFed the last Lenora Bell book, and some of the stuff I heard for the last Shupe book made me completely uninterested in it. So The Devil’s Own Duke by Lenora Bell (September 28) and The Lady Gets Lucky by Joanna Shupe (October 26) are definitely on my radar, but I’m going to wait to read them, I think.

The other book is After Dark with the Duke by Julie Anne Long (November 30). I really loved the first two books in her Palace of Rogues series, but I really didn’t like the third one, I’m Only Wicked With You, so I’ve lost some of my enthusiasm for the fourth book. I’m hoping it will be good and I really enjoy it, but we’ll see.

Also, I cannot for the life of my tell you why I’m not eagerly anticipating A Lot Like Adios by Alexis Daria (September 8). I really loved You Had Me at Hola, along with everything else Daria has written, but this one just doesn’t excite me. I think probably because it’s a second chance romance, which is one of my least favorite tropes. But Daria has made me love tropes before that I didn’t think I’d like, so I’m sure she’ll do it again!

Finally, let me shout out a few books I’m looking forward to reading this fall!

What books are you most looking forward to getting your hands on in the next few months? Let me know in the comments!