I case you missed the memo with some of my more recent posts, I was lucky enough to go to Book Expo for the first time! I had such an amazing time, and while I’ve already shared what I got, I’m also excited to share with you what I all did!

I actually went to the first day of Book Expo on Wednesday, but people are right when they say it’s not really worth it. It was kind of neat to hear the CEO of Barnes & Noble give the keynote address, but the panels were mostly just ok (at least from a blogger perspective) and none of the interesting booths were open. Unfortunately I didn’t find out about Blogbound, a small convention for bloggers, until it was over, but that was happening on Wednesday, too. Definitely something I’ll have to keep in mind for next year!

Anyways, the real show began on Thursday! I went pretty early that morning to try and get a ticket to Rick Riordan’s signing line (certain authors require tickets), but even though I was there by 7:45 (and the floor didn’t open until 9), the line was so big that the tickets were long gone by the time I got to the front of the line. So if you really want to attend a ticketed signing, get there super early! Fortunately, though, Riordan was signing an art print from the upcoming illustrated edition of The Lightning Thief, and while his signing line tickets went super fast, the wristbands for the art print signing didn’t seem to go quite as quickly, and I was able to get one!

One of the coolest things that happened to me when I was at Book Expo was when I was standing in line for Kendare Blake to sign paperbacks of Three Dark Crowns (I found out she’s from Minnesota, btw. So cool!). Al Roker was walking by and filming us and asked what were waiting in such a big line for! And because I was right at the bend in the line and closest to him, I was the one who answered! Definitely a wild start to Book Expo!

Anyways, I spent a lot of the day on Thursday and Friday accumulating books, which you can see in my haul, so I won’t waste time giving you a play by play. I did line up to get most of them, but I didn’t think the lines were too crazy (especially compared to Book Con), and I had so much fun meeting people in line. Seriously, that was probably my favorite part of the whole conference was just meeting new people and talking books with them. And it was fun because then we’d keep running into each other at different lines. It can definitely be a small crowd at Book Expo!

It was also really cool to get a (brief) chance to talk to some of the authors! In addition to meeting Rick Riordan, I got to tell Deborah Harkness how much I enjoyed her All Souls trilogy, and I got to tell Gail Carson Levine how excited I am to revisit the world of Ella Enchanted.

(I would have gushed about how that was one of my favorite books growing up, but I was lucky enough to meet her last fall and already did that.) And I’m still pretty excited about how Thi Bui both signed her book and drew her picture in it! It’s pretty awesome.

I didn’t spend all of Book Expo accumulating books, though; I went to a few panels, too. One of them was with Rick Riordan, Roshani Chokshi, and J.C. Cervantes about the new Rick Riordan Presents imprint. I really enjoyed listening to them talk about their books and the new line, and I’m so excited to read them all. They have some amazing books lined up for that imprint!

I also attended one about selling romance via indie bookstores that I thought was really interesting. Basically, there’s a lot of evidence that romance sells really well and that romance events draw in big crowds, but a lot of indie bookstores are still reluctant to carry romance on their shelves. There’s definitely a big misconception about what romance is and what the romance reader looks like, and a lot of booksellers are snobs when it comes to romance. But the industry has been making a big push lately to dispel some of those stereotypes, and now you’re seeing romance shelves at places like Harvard Book Store. It was a fascinating panel comprising publishers, authors, and booksellers, and I hope booksellers take their advice into consideration. There’s nothing worse than walking into a bookstore and being met with derision for your taste in books.

The last panel I attended at Book Expo was called Rise Up and featured Becky Albertalli, Adam Silvera, Tahereh Mafi, and Ibi Zoboi. It was really interesting to listen to them talk about their latest books and their personal experiences with discrimination and representation, and overall I found the panel really inspiring. I can’t wait to read some of the book they talked about! 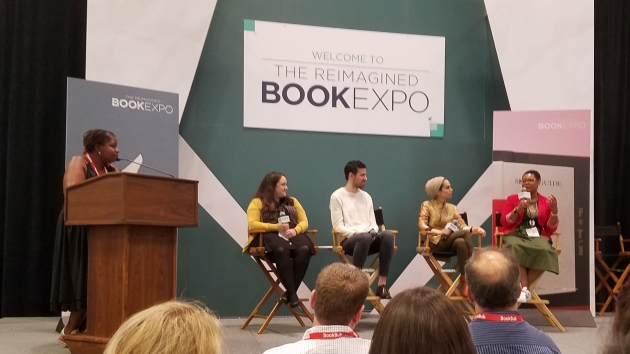 When I wasn’t at panels or waiting in lines, I had a lot of fun just walking the show floor and seeing what all of the booths looked like and what they were promoting and what was going on. One of my favorite things at Book Expo was watching this wall that said “Share the Book that Changed Your Life.” It started out blank, but over the course of Book Expo and Book Con, it filled in with all sorts of different answers, and it was really cool to see it change and read some of the different responses. I wish I could say I had something really unique to write down, but I had to go with Harry Potter. It practically defined my childhood; how could I not answer with Harry Potter?! 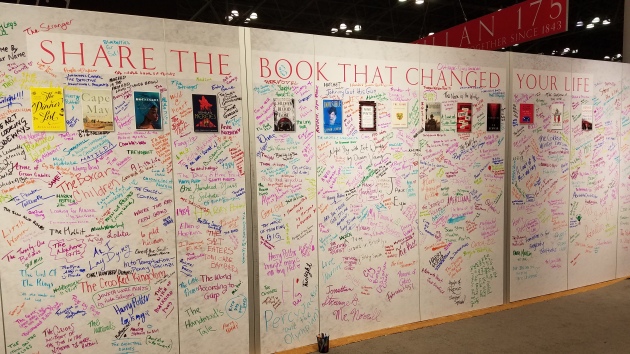 The corgis that got away!

Also, I’m so mad. My friend texted me a tweet showing that there were corgis at Book Expo as part of the promotion of a book (I’m sorry, it was a children’s book and I wasn’t interested, so I don’t remember what it was anymore). I actually stumbled across them and they looked adorable, but since it seemed like a photo op, I figured you couldn’t just walk up and pet them, so I didn’t. BUT YOU COULD!! I saw pictures later of people petting the corgis and of the corgis attacking Daniel Jose Older. Seriously, my biggest regret is not going and playing with them!

I also ran into Emily from Possibly Literate during my walk around the show floor. Not going to lie, I felt really weird going up and saying hi so I almost didn’t, but I’m so glad I did! I wound up standing and talking with her and Madalyn from Novel Ink for almost an hour while we drank champagne that Macmillan was handing out in honor of its 175th anniversary, I believe. It was a lot of fun!

I think one of the most interesting things for me as a first time Book Expo attendee is how vast the book industry is. There were so many booths there for all different sectors of the publishing industry, including children’s books and pop up books and books published in foreign languages and academic presses. It was just so interesting to see and getter a wider perspective on the industry than what I’m normally drawn too.

It was also really interesting to get a sense of who’s all attending Book Expo. Yes, there are definitely bloggers and booktubers, but there are also a lot of teachers and librarians and publishers and aspiring authors and book buyers. You really have people there from all aspects of the book industry, and it was really cool to talk with some of them and broaden my perspective.

Between all of the free books and meeting new book lovers and running into authors on the show floor (I got to say hi to Mackenzi Lee!), I had so much fun at Book Expo. It’s definitely an experience I’ll never forget, and I hope I get the chance to attend again in the future!