It’s time for part two of my favorite books of 2017! In case you missed it, be sure to check out part one here.

Seabiscuit and Unbroken by Laura Hillenbrand 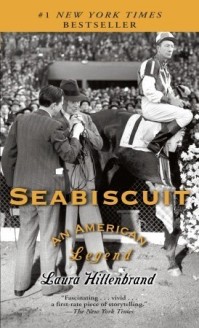 So I’m kind of cheating here and counting Seabiscuit and Unbroken by Laura Hillenbrand as one book even though they’re completely different because I like them for very similar reasons. Seabiscuit follows the titular racehorse and his owner, trainer, and jockey as he becomes one of the most legendary horses in history, while Unbroken is one man’s story of surviving more than 45 days in a life raft during World War II followed by more than two years in a Japanese prisoner of war camp.

What Hillenbrand does so well is bring history to life with these books. She gets you invested in the story of a specific person (or horse) and makes them real for the reader, and then she puts their stories in context. In the case of Seabiscuit, you also learn a lot about the United States during the Depression-era, while Unbroken provides a lot of history about the war in the Pacific and what prisoners experienced in POW camps in Japan. I can’t say that either of these books sounded super exciting to me before picking them up, I’d just heard good things and knew they’d both been turned into popular movies. But Hillenbrand quickly captured my interested and kept it through the course of both books, and I would definitely consider her one of my favorite authors. Both Seabiscuit and Unbroken are great stories that I highly recommend, but I think you’ll especially enjoy these books if you’re a fan of Erik Larson’s work.

The Color Purple by Alice Walker

This is another book that easily could have been on my most surprising reads of 2017 list because I did not expect to like it when I picked it up. I know it’s a classic, but usually that’s a pretty good indicator that I will not like a book, and the premise didn’t convince me otherwise. The Color Purple is Celie’s story, and what a terrible story it is. As the book opens, we find out that she has been raped by her father and forced to bear him two children who are later taken away from her, and she is now marrying a man with two children who treat her terribly. It’s a very bleak start to the book.

But omg, it was such an amazing story. Yes, Celie’s life is heartbreaking at the beginning of the book, but I was so impressed by her ability to survive and grow despite the way she’s been treated. She accepts her lot in life but does what she can to make the best of it, and through the relationships she develops in the book, she really evolves as a character. And while I struggled with the dialect at first, I eventually caught the rhythm of it and thought it made Celie’s voice even more distinct and real. My favorite part of the book was the relationships between the characters and how so many of the story lines came together in the end. I found this book to be both an important read and an enjoyable one, and I definitely recommend reading it. 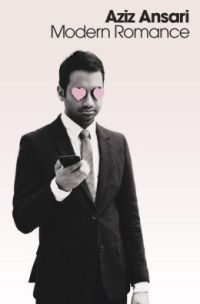 Modern Romance is a book about modern day dating and how it’s evolved with the rapid advances in technology, touching on topics from Tinder to sexting to cheating. This book involves a fair amount of psychology, like the power of waiting in the context of what difference it makes to delay responding to a text, as well as the history of dating and the rise of online dating. And as you’d expect, there’s a ton of Ansari’s humor sprinkled in as well, making it a really fun and easy book to read.

I enjoyed this book a ton while also learning a lot, which made it a perfect combo for me and helped it earn a spot among my favorites from 2017. I find the whole concept of dating in today’s world fascinating, and this book looks a lot at online dating and how it works and some of the psychology involved, which I really enjoyed learning more about. Plus this book discusses how and why dating today is so different from only a generation or two ago, and it looks at dating differences between cultures, making it a pretty thorough look at modern romance. I would also recommend checking out this book on audio since it’s narrated by Ansari! 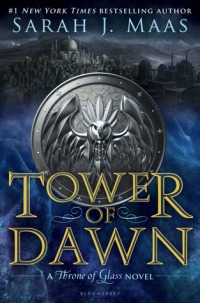 I think it’s so interesting how a number of my favorite books are ones that I was not expecting to love, as Tower of Dawn was also on my list of biggest reading surprises of 2017. This is the sixth (I think? Is that what we’re calling it?) book in the Throne of Glass series, which is an epic YA fantasy that I’ve been loving. If you’ve been hiding under a rock and haven’t heard of these books yet, you can check out the synopisis of the first book on Goodreads here.

Like I said in my biggest surprises post, I didn’t particularly want this book to be written. It seemed like an unnecessary sidestep in the series that was really only delaying publication of the final book, and I was not happy. I should have known better, as I wound up loving this book. I think Maas did an amazing job expanding the Throne of Glass world and I loved learning more about the Southern Continent, plus I found Chaol’s storyline about being paralyzed really interesting. I’m also a fan of the pairings that result in this book, though I won’t spoil them for you. So yeah, I went from not particularly caring about this book to really enjoying it. If you’re like me and you’ve been at all hesitant to read this one, I would say you need to go for it!

And Then There Were None by Agatha Christie

See, this is another book that easily could have been on my list of most surprising reads. And Then There Were None starts with a group of strangers being invited to a mysterious island for a house party. At dinner, a recorded messages accuses each of the guests of murder, and before the evening is over, one of their number is dead. “Stranded by a violent storm, and haunted by a nursery rhyme counting down one by one . . . one by one they begin to die,” the blurb promises.

I struggled with the beginning of this book as there were so many different characters introduced in a short amount of time and they were difficult to keep track of. But once the first person died, the story really took off, and I finished the rest of the book in one sitting. This book was really freaky with the murders matching up to the poem hanging in the guests’ rooms, and every time I thought I had something figured out, I was wrong. I got nowhere close to figure out who the murderer was, and it made for a wild ride of a book. I enjoyed it so, so much and definitely plan to check out more mysteries and thrillers in 2018!

Considering I read this entire trilogy in less than a week, it should come as no surprise that the Red Rising trilogy made my list of favorite books in 2017. The Red Rising trilogy is a dystopian meets science fiction-type novel, though I think it’s more than either of those genres. Darrow is a Red mining Mars for elements to be used in terraforming the planet, until one day he finds out everything he thought he knew was a lie and that Mars has been inhabited for generations. When his wife is executed, he’s plunged into the center of a movement to overthrow the current ruler of the solar system and eradicate the color-based caste system that kept his people oppressed for centuries.

This trilogy was just such a ride, and I loved every minute of it. It was so much fun seeing what surprises the book would throw at me next and how many tricks Darrow had up his sleeve, and I love all of the politics and intrigue in this story. It was super heart wrenching, too; more than a few times I felt like I was reading Game of Thrones because so many characters died, so don’t get too attached! I really, really enjoyed these books and highly recommend them if you’re a fan of sprawling sci fi or fantasy books.

The Female of the Species by Mindy McGinnis

“Alex Craft knows how to kill someone. And she doesn’t feel bad about it,” according to the blurb for The Female of the Species. When the man who assaulted and murdered her older sister walked free, Alex took matters into her own hands and killed him. In this contemporary YA book exploring rape culture, Alex finds herself becoming friends with star athlete Jack and defiant preacher’s kid Claire while knowing that she shouldn’t be trusted around people given the violence inside her.

It’s been almost a month since I read this book and I still have so many thoughts about it, so I think it definitely belongs on this list. It’s just so heart wrenching and important and I definitely recommend checking this book out. McGinnis did an excellent job creating the different characters and weaving their stories together to show how pervasive rape culture is and what a wide impact it has. It also raises important questions about vengeance and justice and morality that I’m still thinking about. It’s unlike any book I’ve ever read and I highly encourage you to pick it up.

And there you have it! My favorite books that I read in 2017! Honorable mention to some of my rereads, which I didn’t include in my favorites but were also some of my favorite reads this past year: Harry Potter by J.K. Rowling, Sense and Sensibility by Jane Austen, Ella Enchanted by Gail Carson Levine, A Summer to Remember by Mary Balogh, and Graceling by Kristin Cashore.

Let me know what your favorite reads of 2017 were in the comments!