It’s time for another arc roundup! This month’s post includes a contemporary from Alisha Rai, featuring a female app developer, a delightfully hilarious historical from Tessa Dare, the latest in Lorraine Heath’s Sins for All Seasons series, and a bonus fake relationship contemporary from Lauren Blakely, a new-to-me author. Spoiler alert: I think the Tessa Dare book might be one of my favorites of the year! 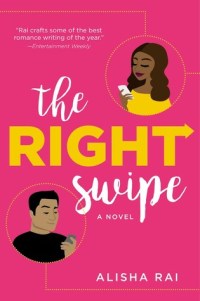 As mentioned above, The Right Swipe by Alisha Rai features a female dating app developer as the heroine. Rhi had an amazing night with a guy she met using her app several months back, and was hurt and upset when he ghosted her since he seemed to feel the connection, too. But guess who turns out to be the new spokesperson for the matchmaking company Rhi is trying to acquire? Her one-night stand, Samson. Turns out, he had a good reason for ghosting her, but Rhi doesn’t want to hear it. So how to they get to their HEA from there? You’ll have to read and find out!

I’m constantly impressed by Alisha Rai’s books even though they aren’t always necessarily my thing, but this one 100 percent is. I think it’s my favorite book of hers yet. I really liked how tough and prickly Rhi was and seeing her gradually lower her guard, and I loved how adorable and supportive Samson was. It’s a lot lower angst than the Forbidden Hearts trilogy, which I think it part of what personally draws me more towards The Right Swipe, but that doesn’t mean the stakes are any lower or the romance any less swoonworthy. And I thought Rai did an amazing job bringing in topical issues, like CTE and workplace harassment, without it detracting from the romance. All in all, I raced through this novel and enjoyed it so much. I can’t wait to see what else Rai has in store for this series!

Also, I’m a little afraid to ask her because I don’t want to be the crazy North Dakotan reading too much into things (I mean, good lord, what if I’m wrong?), but I think one of the football teams in the book is named after the NDSU Bison. I mean, a bison is a really specific choice in mascot, and I’m sure that NDSU is the most well known school with that mascot. And I know Rai used to live in Fargo. But I feel I wind up mentioning Fargo literally every time I see her at events and I don’t want her to think that’s the only thing I can talk about! So I’m afraid to ask. But I’m just throwing that out there! 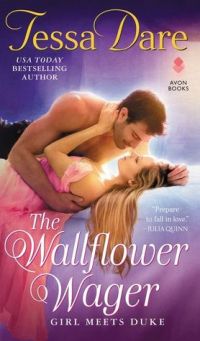 Speaking of favorites yet, I think The Wallflower Wager might be my new favorite from Tessa Dare, and that’s pretty hard to do considering so many of her books are already my favorites. The Wallflower Wager continues the Girl Meets Duke series with Penelope, the slightly zany friend who collects all sorts of rescued animals. But when her new neighbor tries to force her to get rid of them, she agrees—so long as he helps find loving homes for them. Of course all kinds of crazy adventures – and love! – ensue.

I’m not sure I can express how much I love this book. This is pretty much everything I love in a romance novel, and just writing about it is making me want to reread it. For one thing, this book is super funny. The parrot from the opening of the book is everything, and it only gets better from there. Honestly, I couldn’t stop laughing out loud while I was reading this, and I was so amused that I had to keep reading parts of it out loud to my husband because I needed someone to share how funny this was. But at the same time that I was laughing, Gabriel and Penelope were slowly but surely falling in love, and their story was just the kind that makes me want to just hug the book. It’s so sweet and adorable, especially because Gabriel kept trying to fight it and neither of them is especially thrilled with the other, but they just can’t help it. Though definite trigger warning for childhood sexual abuse, which happened to the heroine off page and is a central part of the story near the end.

All in all, I think Tessa Dare has really outdone herself with The Wallflower Wager, and I am SO EXCITED for everyone else to be able to read it. It honestly might be my favorite book of hers yet, and you can guarantee it will be one of my favorite reads of this year. Read this book!!

The Duchess in His Bed by Lorraine Heath (August 20) 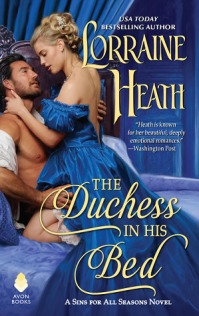 The Duchess in His Bed is the latest installment in Lorraine Heath’s Sins for All Seasons series following the Trewlove siblings. This book is Aiden’s story, and it begins when a mysterious woman approaches him in the club he runs for women to have a space of their own. Selena’s husband has just passed away, but he has no heir and his estate is set to return to the crown unless Selena gets pregnant quickly enough to pass the baby off as her late husband’s, which she must do in order to ensure her sisters’ futures. Fascinated by Aiden after seeing him at his sibling’s wedding, she’s determined he’s the perfect candidate, and he can’t stop thinking about her. And of course, the more time they spend together, the more they start to fall in love with each other.

If this weren’t a Lorraine Heath novel, I might have DNFed it in the first half just because I really wasn’t that into it. I disliked that Selena was trying to trick Aiden into giving her a baby in order to secure her recently deceased husband’s line of succession, though I did understand why. But it still wasn’t a plotline I was thrilled with, and I didn’t fully realize that that was where it was going when I picked it up. That combined with the fact that I thought their romance moved along way too fast and didn’t seem to involve them getting to know each other that well resulted in my not loving the first half of this novel.

That said, I actually really liked the second half and am glad I stuck with it. I love the Trewlove family and watching Selena get to know them and seeing how fiercely protective Aiden is of them, and I really loved watching Selena come into her own and realize what she wants with her life. The ending of this book was so satisfying, and I really can’t wait for Fancy’s story! She set up her own bookshop in this book, and I’m excited for her to be the heroine of the next one.

If you’re a Lorraine Heath fan and have been following along with this series, I don’t think you’ll be disappointed in the latest installment, though your enjoyment can definitely vary. If you’re new to the series, I definitely recommend going back and starting with Beyond Scandal and Desire just so you can get to know the whole family and enjoy the journey. 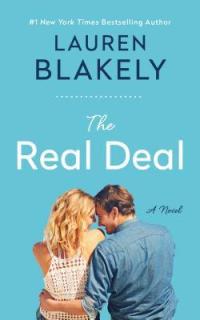 The last book I want to talk about is The Real Deal by Lauren Blakely, which has been out for a few months now, but I was sent a finished copy earlier this summer through the St. Martin’s Press Influencer program.

This book features a classic fake relationship setup that I actually found rather believable. April’s family is trying way too hard to set her up with someone from her hometown so she’ll move back from New York, so she wants to bring a friend home as a fake boyfriend to act as a buffer. But when her friend has to bail on her at the last minute, he instead suggests she take his friend Theo, who has a good side gig going as a (platonic) date for hire. But of course, the more time they spend together, the more they realize they actually like each other!

Ok, I can’t lie, I wasn’t expecting to like this book all that much. It’s a cute setup, but it didn’t sound like anything special and I hadn’t heard anything about it, so I wasn’t especially eager to read it even though I was incredibly grateful to get it in the mail. But I was completely blown away. I love this book! The back and forth between April and Theo was hilarious, and I really liked their connection and seeing them navigating the whole are we fake dating or real dating thing. And I thought the fake dating trope was handled really well, including how it was resolved at the end. It was such a fun read, and I raced through it pretty quickly because I couldn’t bear to put it down.

I will say, I didn’t love that the timeline of the book was literally four days. It’s just such a short timeline for them to be confessing their love for each other, though it was easy enough to just roll with it while I was reading and get caught up in the story. I also wish we could have seen more of Theo and April developing their relationship back in the city. I’m not entirely sure how that would have worked with the story that was in place here, but I think it’s important to see their relationship outside of the bubble of April’s family reunion.

Honestly, though, those are nitpicks, and I mention them only because I think this story would have been absolutely phenomenal had they been addressed. But even without them, this was an immensely enjoyable book and I’m so glad I picked it up. If you’re a fan of fake dating stories or are looking for a fun contemporary to get swept up in, I can’t recommend The Real Deal enough!

Have any of these books on your radar? Already picked them up? Let me know your thoughts in the comments!

Lol, I'm two days into my impromptu instagram challenge, and I already forgot to take a pic of my next read when I was out and about today! I started reading this for my book club, but had to start skimming. Let's just say I'm not a fan of this book and I need a palate cleanser.
So I kind of want to try a post a day throughout January and document more of what I'm buying and reading. We'll see if I stick with it or not! Regardless, my very first read of the year is Rebecca Roanhorse's Race to the Sun, which will be released Jan. 14. It's a middle grade fantasy about a Navajo girl who can see monsters. I LOVE Roanhorse's Sixth World series and am so excited to be reading an early copy of Race to the Sun!